Carmelo Anthony and the Atlanta Hawks have officially agreed on a buyout in which Carmelo will give back $2.4 million of his $27.9 million dollar salary. Anthony will wait 48 hours to clear waivers before he officially announces his plans to sign with the Houston Rockets.

According to a report first published by TSN Sports Network, the Toronto Raptors are “very” interested in free agent big-man Greg Monroe in the coming days.

Last season, Monroe averaged 10.2 points and 6.3 rebounds per game wearing a Boston Celtics’ jersey. The forward joined the Celtics in February and only saw action in 26 games during their 2017-2018 season campaign.

Monroe was selected seventh overall by the Detroit Pistons during the 2010 NBA Draft. He played five years in Detroit and eventually ended up singing with the Bucks in 2015. Monroe was then traded from the Bucks to the Phoenix Suns who released him after playing 20 games for them.

Monroe was drafted by the Detroit Pistons in 2010

The 28-year-old big-man will likely play a veteran role for the Raptors if the team eventually signs him during the NBA’s offseason.

Anybody who has an interest in basketball knows about the video game series “NBA2K.” On September 11th, the newest installment of the game, NBA2K19, will drop for all players to enjoy. From the battleground that is Twitter to your workplaces’ break-room, NBA fanatics have never seemed to agree on the ratings the game awards certain players. Some people believe they should be lower, while others believe they should be a bit higher and whatever the case may be, people love to find out the ratings as they come out. So here on Hoops Table, we have created a live NBA2K19 rating tracker which we will update with the players who have the top-ten highest ratings so far! Enjoy!

Did any ratings surprise you? Leave a comment and share this on social media to show your friends!

This page will be updated as more information becomes available.

The Houston Rockets’ general manager Daryl Morey announced that the team is actively “in the mix” to sign Carmelo Anthony via a fan’s question on Instagram. 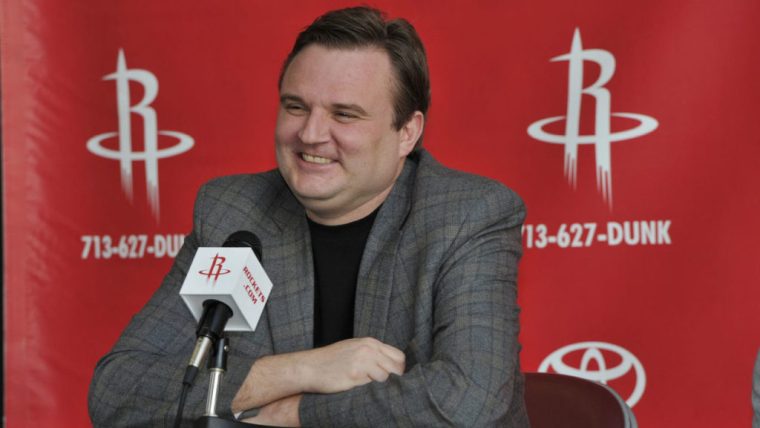 Morey became the GM for the Houston Rockets in 2007

The announcement made on Saturday should be no surprise to anyone who has been following the situation this offseason, as the Rockets have been the outspoken frontrunners to sign Anthony once he is bought-out by the Hawks. Reports have also surfaced during the week stating that the former All-Star has been telling people close to him that he “expects” to land in Houston this offseason.

Morey and the Rockets’ front office haven’t been shy about their interest in signing Anthony, but they don’t seem to be the only ones who would like to have Carmelo on the Rockets’ roster next season. Superstar guard Chris Paul has been known to have close ties to Carmelo and the two reportedly have formed a great relationship over the years. Rumors about Paul spearheading the charge for Houston to sign Carmelo have surrounded the franchise for weeks, and they don’t look to be slowing down. 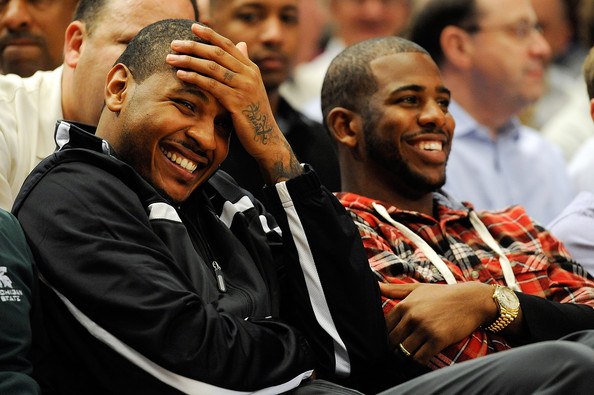 Chris Paul and Carmelo Anthony are known to be good friends

Assuming Carmelo hits the open market in a week or several days, the Rockets can be expected to extend an offer to him within no time. If Morey and the Rockets are able to sign Melo when he becomes available to them, then it will be another accolade that Houston’s GM can add to his already impressive resume.

The Atlanta Hawks are reportedly finalizing a deal with talented big-man Alex Lin. The news was broke by Yahoo Sports after a person familiar with the situation told the media company. Last season, Len averaged 8.5 ppg, 7.5 rpg, and 1.2 assists per game while playing in a Phoenix Suns’ jersey. The deal the two sides reportedly discussed is worth $8.5 million in exchange for two years of the center’s services.

RFA Montrezl Harrell has reportedly agreed to a two-year deal with the LA Clippers per ESPN’s Adrian Wojnarowski. The deal Harrell agreed to is worth $12 million in exchange for two years of the big-man’s services.  Last season, Harrell averaged 11 points and four rebounds per game while sporting a Clippers’ jersey. The Clippers acquired Harrell during the Chris Paul trade, after the talented big-man had posted promising numbers with the Rockets that season.

The Oklahoma City Thunder, Atlanta Hawks, and Philadelphia 76ers have agreed on a trade which sends Carmelo Anthony, Justin Anderson, and a protected 2022 first-round pick to the Hawks, while OKC lands guard Dennis Schroder and Luwawu-Cabarrot in the deal. Philadelphia also acquires Mike Muscala in the three-team trade. The Hawks have also agreed to buyout Carmelo’s contract worth $27.9 million dollars. This deal helps the Oklahoma City Thunder tremendously in salary and luxury tax savings, with the total being somewhere near $73 million. The Thunder also avoid having to stretch Carmelo’s contract thanks to this trade. Carmelo will meet with more teams once he is bought-out and reports are surfacing saying that the Houston Rockets remain the frontrunners.

Kawhi Leonard has been traded to the Toronto Raptors in exchange for DeMar DeRozan, Jakob Poeltl, and a 2019 first round pick which is protected 1-20. In the deal, the Raptors also received a solid role player in Danny Green. 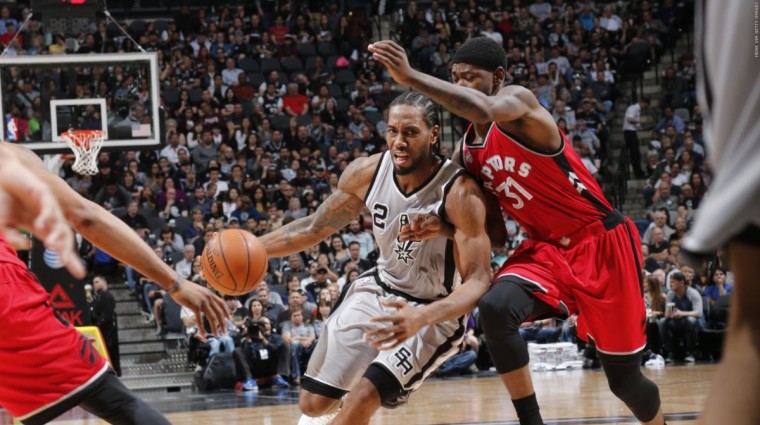 The two stars involved in the trade were notified before the news went public.

This page will be updated when more information becomes available.

According to multiple reports, the Portland Trailblazers have expressed interest in San Antonio Spurs’ superstar Kawhi Leonard after a phone call between the two parties took place. A report written by Adrian Wojnarowski and Ramona Shelburne of ESPN states that the Trailblazers enter their name on the list of teams that have contacted the Spurs via phone calls, joining teams like the Clippers, Nuggets, Suns, Raptors, and Wizards on that list.

Kawhi has made his intentions clear with the Spurs: He would like to be traded to LA

While the phone call reportedly generated little to no promise, it does say something about the Trailblazers as an organization for reaching out to the Spurs. The Trailblazers haven’t had much success in the playoffs as of late, despite having solid regular seasons. In a universe where the Trailblazers are able to offer and receive Kawhi Leonard, the teams value and potential would skyrocket, not to mention the fact that a player like Kawhi would help them succeed in the playoffs. This outcome seems highly unlikely though, as the Blazers don’t seem to be willing to break up their young core and the offer didn’t seem to be to serious towards the Spurs.

San Antonio Spurs’ rookie Lonnie Walker IV found his own special way to pay homage to his hometown over the weekend by donating 300 pairs of basketball shoes to local hoopers playing in Reading PA’s Blacktop Basketball league. The rookie managed to hand out 30,000 dollars worth of basketball shoes with the help of Adidas executive Eric Wise, who is also native to Reading.

The shoe Walker IV was reported to have donated is the Adidas “Crazy BYW” model pictured above.

Walker IV was drafted by the San Antonio Spurs as the 18th pick in this years draft class, while many analysts believed he had the potential to be a lottery pick. The 19-year-old played basketball at the University of Miami where he averaged 11.5 ppg, 1.9 apg, 2.6 rpg, and .9 spg while playing in a Hurricanes’ jersey.

When asked about the generous donation, a member of the Blacktop Basketball League’s Board said this:

“Lonnie has been nothing but genuine in being a role model and carrying himself the right way. That’s what he has done from the beginning. He’s everything we knew he would be, in terms of how he carries himself. He’s been nothing but a perfect role model.”

Eric Wise attended Reading High School, which is the same school Lonnie went to,  and played basketball when he was younger. Since becoming an executive at Adidas, Wise has advised the company to try and sign Walker IV to be a representative of the brand. In the months before this years NBA draft, Walker IV was signed by Adidas to an endorsement, and its likely Wise had a huge part in pushing for the signing. 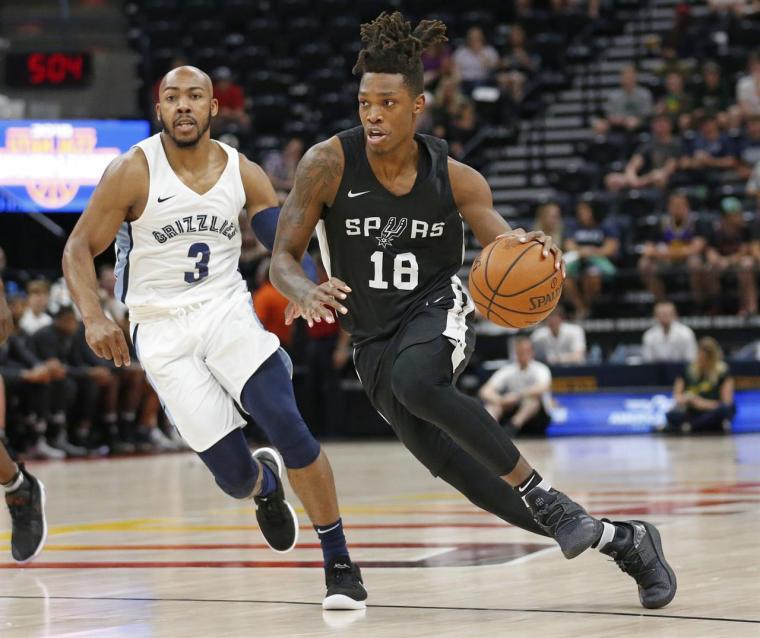 Lonnie Walker IV averaged double-digits during the Summer League in Las Vegas, which further strengthens the idea that he can become a solid player in the league. If Walker IV can keep up his high level of play, he will be representing his state and hometown very well in league.