According to league sources, superstar point guard Damian Lillard and the Portland Trailblazers are working towards finilizing a maximum contract extension that would keep the 28-year-old in Portland for the next four years.

League sources informed Shams Charania of the Athletic early Sunday about the news regarding the star point guard. The potential contract extension could be worth around $196 million in exchange for four more years of the former ROTY award winner’s services.

During his time in Portland, Lillard has been tasked with becoming the face of the franchise and, paired with fellow teammate C.J. McCollum, has created one of the most dangerous backcourts in the powerful Western Conference. While there is not yet word on how long it will take the two sides to reach an agreement, Trailblazers’ fans can remain optimistic about keeping the star point guard in Portland for the foreseeable future.

Want to keep up with all of the free agency action? Follow us on Instagram and Twitter to receive instant reports about your favorite teams and players! Make sure you turn on post notifications so you never miss a report! Happy free agency NBA fans!

According to ESPN insider Adrian Wojnarowski, Kevin Durant has declined his player option with the Warriors, for the 2019-2020 season, meaning he will become an unrestricted free agent. Currently Durant and his manager are in New York evaluating their options, keeping the process very private and out of the public eye.

According to ESPN’s Adrian Wojnarowski, the Memphis Grizzlies are trading Mike Conley Jr to the Utah Jazz in exchange for Grayson Allen, Kyle Korver, Jae Crowder, the 23rd Pick in the 2019 NBA Draft, and a future first-round pick. The two sides had been engaging in trade talks heading to the week, with the pair finally striking a deal early Wednesday.

According to multiple reports, free agent superstar Jimmy Butler is garnering interest from the Houston Rockets and is expected to be “aggressively” pursued by the organization during the NBA’s free agency period. After being traded to the Philadelphia 76ers just before the mid-season deadline, Butler averaged 18.2 points per game, 5.3 rebounds per game, and 4.0 assists per game while shooting about 46.1% percent from the field. If Butler decides not to rejoin the 76ers on a new contract, the Rockets could be a viable option for the 29-year-old. While their is no word yet on what a potential deal could look like, Rockets’ GM Daryl Morey has been very vocal about his goal to acquire another superstar, which he believes will help get the Rockets over the Western Conference Finals-hump. 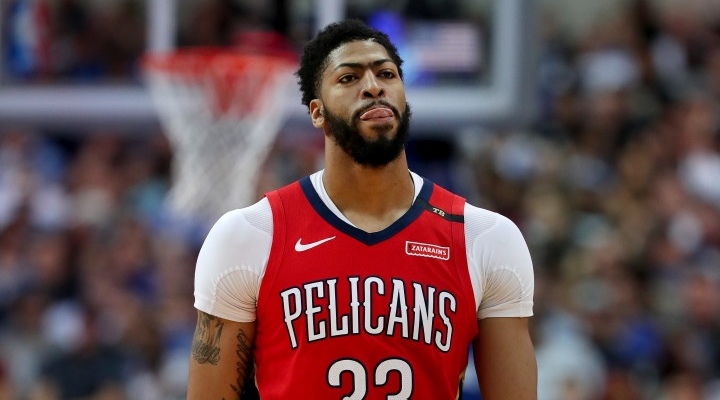 According to ESPN’s Adrian Wojnarowski, the New Orleans Pelicans have agreed to send superstar big-man Anthony Davis to the Los Angeles Lakers in exchange for Lonzo Ball, Brandon Ingram, Josh Hart, and three first-rounders, including the 4th pick in the 2019 NBA Draft. Davis and his agent announced earlier in the offseason that the young superstar would be willing to sign a long-time extension with the Lakers, so when the deal came across the table, the Lakers jumped at the chance to grab Davis.

The Toronto Raptors defeated a banged-up Golden State Warriors’ team on Thursday to capture the franchise’s first NBA Championship. Behind powerful performances from Kawhi Leonard and Kyle Lowry, the Raptors powered their way through an injury-filled Warriors’ team to capture the elusive Larry O’Brien trophy in six games. Check out all the highlights from Game 6 of the NBA Finals below courtesy of House of HIghlights on YouTube!

According to Shams Charania of the Athletic, Warriors’ superstar Kevin Durant has undergone surgery to repair a ruptured Achilles. Durant suffered the injury early on during the Warriors’ 106-105 victory against the Raptors in Game 5 of the NBA Finals. While it is unclear as to how long the recovery period will be for Durant, the 30-year-old remained positive on Wednesday, announcing on an Instagram post that “it’s going to be a journey, but I’m built for this.”

Spurs legend Tony Parker announced early Monday morning that he has retired from the NBA after 18 years.

The 6x All-Star won four championships with the Spurs before leaving in Free Agency and playing his final year with the Charlotte Hornets. The 2007 NBA Finals MVP averaged 15.5 points and 5.6 assists throughout his long and impressive career. The Belgium-born Parker also played a number of years overseas in Europe where he captured a Euro-league Championship and the MVP award.

According to Golden State Warriors’ Head Coach Steve Kerr, Forward/Center Kevon Looney will play tonight in Game 4 of the NBA Finals. Looney missed Game 3 of the Finals after he suffered a non-displaced first costal cartilage fracture during Game 2 of the series. Kerr announced during a pre-game press conference that the team would “give him a shot and see what he’s got” since he was reportedly “dying to play.” There is not yet word on whether or not the training staff will put a minutes restriction on Looney during tonight’s matchup versus the Toronto Raptors in Oracle Arena.

According to ESPN insider Adrian Wojnarowski, the Atlanta Hawks and the Brooklyn Nets have engaged in a rare playoff-time trade.

According to reports, the Atlanta Hawks are sending a 2021 second-round pick and Taurean Prince to Brooklyn in exchange for the Nets’ 17th selection in this years’ draft, a protected first-round pick in 2020, and promising young big-man Allen Crabbe.

This move clears nearly $18 million in additional cap space for the Nets to use this upcoming free-agency, bringing their grand total to $46 million worth of cap space. With the amount of money the nets will have available after completing this trade, the team has enough cap space to sign a free-agent to a max deal and retain restricted free-agent D’Angelo Russell this offseason.

As for the Hawks, the rich get richer in this case. Through trades and the draft lottery, the Hawks have found a way to potentially carry three first-round picks into this years’ draft. While rumors swirl around about the franchise potentially using these newly-acquired picks to move up in the draft, the Hawks haven’t given any indication that they plan to move up on draft night.